Ideas Behind the Ovals

The current Toyota mark was introduced in October of 1989, to commemorate the 50th year of the company. The development of the current logo took about five years, as it was necessary to develop a suitable logo to integrate with the rising profile of Toyota in foreign countries. There were two motivating factors in designing the logo: recognition from a distance announcing the "arrival of Toyota", and a logo with a strong visual impact that stands out from other automobiles.

There are three ovals in the new logo that are combined in a horizontally symmetrical configuration. 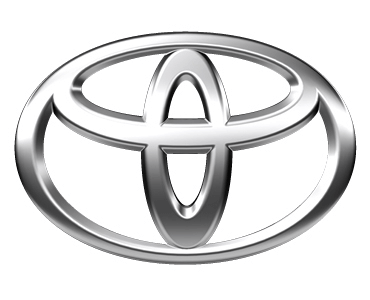 The overlapping of the two perpendicular ovals inside the outer oval symbolize "T" for Toyota, as well as a steering wheel, representing the vehicle itself.

Each oval is contoured with different stroke thicknesses, similar to the "brush" art known in Japanese culture.

The space in the background within the logo exhibits the "infinite values" which Toyota conveys to its customers: superb quality, value beyond expectation, joy of driving, innovation, and integrity in safety, the environment and social responsibility.

Power of the Brand

This newly designed Toyota logo made its debut on their luxury model, Celsior, in October of 1989. Soon after more models were proudly displaying the new emblem. An unprecedented logo of its time and clearly perceptible from both head on and a rear view mirror, it has quickly became widely recognized as the symbol of "Toyota".