From "TOYODA" to "TOYOTA" 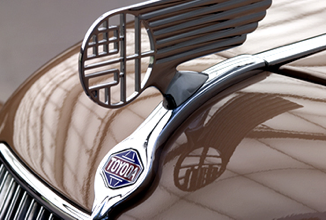 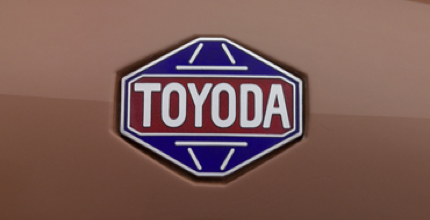 Toyota originated from the family name of the founder, "Toyoda", with early vehicles produced by the company originally sold with a "Toyoda" emblem. In 1936, the company ran a public competition to design a new logo, which lead to a change in the brand name to what is now called "Toyota".

It has been regarded as a favorable transition from "Toyoda" to "Toyota", because voiceless consonants sound more appealing than voiced consonants. In addition, through the concept of "jikaku" (counting the number of strokes in writing characters to determine good and bad luck), its eight-stroke count is associated with wealth and good fortune. Lastly, the change also signified the expansion of an small independent company to a larger corporate enterprise.

The front emblem from the first passenger car (the model AA) which started mass production in 1937. This mark is composed of the wings to convey speed and kanji "Toyoda" which was made into a design.

A front mascot composed of the kanji mark "Toyoda" and the "shachihoko", which is an iconic symbol of Nagoya, prefectural capital of Aichi and origin of Toyota. It was first used in Toyota's first truck, the "G1 Truck."