TMC is involved in a wide range of initiatives in order to help achieve a sustainable society. In addition to improving the fuel efficiency of its vehicles to help prevent global warming and to also enhance energy security; TMC is also supporting various bio-technology businesses. For example, TMC has applied its wealth of knowledge about production control systems and process improvements to the agricultural field so as to help develop the cloud-based agricultural IT management tool (Housaku Keikaku). At the same time, TMC is also developing a technology that would help to increase the yield of sugar-cane as an alternative biofuel source.

Conventional agricultural plant improvement to increase crop yields involves selecting and interbreeding of parent varieties based on extensive past improvement data, assessing progeny over the long term, as well as selecting new progeny with the desired property. However, although the recently developed marker technology*1, which uses genetic information to predict plant characteristics has helped to improve the efficiency of this process, the lengthy time needed as well as the high cost of this method of DNA analysis have sought to hinder its adoption.

In response, TMC has paired its proprietary sample preparation technology*2 with a next-generation sequencer*3 to develop GRAS, a new technology that can substantially simplify the process of identifying and selecting useful genetic information. GRAS is capable of analyzing DNA in about one-tenth the time needed, and at around one-third the cost of conventional techniques that are being utilized. This is a promising technology that has the potential to boost sugar-cane production, and to increase biofuel crop yields per unit area of land.

In addition to increasing biofuel crop yields, TMC believes that this new technology can also be used to help increase the production and the disease resistance of food crops. TMC plans to continue actively disclosing and providing information about this technology to help facilitate its application in the agricultural sector. A technical evaluation is already under way in cooperation with the Kazusa DNA Research Institute, as the institute has an extensive experience in the field of DNA analysis.

TMC plans to announce the details of this technology, including the analytical results for the materials provided by NARO, at the 130th Meeting of the Japanese Society of Breeding (JSB) which is due to be held in Tottori starting September 24.


Technology that uses characteristic DNA sequences (markers) on the genome (genetic information) to identify useful genes, and to also analyze the presence of these genes, as well as parent/progeny and genetic relationships.


Technology that amplifies thousands to tens of thousands of locations on the genome with a high degree of repeatability as a means of amplifying the sequence of an analysis sample using a proprietary primer (nucleic acid fragments necessary for the synthesis and replication of DNA).

*3Next-generation sequencer:
A device capable of analyzing tens of million to billion locations on the genome at the same time.
You may also be interested in:
Read Article 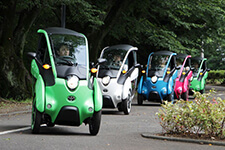