Toyota Research Institute is also awarding OSRF a $1 million charitable contribution in support of its mission to advance the development and adoption of open source robotics software.

"At Toyota, we are creating better ways to move, whether it's across the room, across town, or across the country," said TRI CEO Gill Pratt. "The Open Source Robotics Corporation team brings unparalleled technical expertise and industry-leading technology platforms, which we intend to embed in the heart of our research programs. TRI also believes that the open source movement can catalyze the development of the robotics industry, and we are excited to help OSRF expand its impact."

"As the nine-year anniversary of ROS approaches, it's humbling and extremely gratifying to see the widespread adoption of open source robotics tools such as ROS and Gazebo," according to OSRF CEO Brian Gerkey. "It's particularly exciting to see increased commercial uptake among commercial innovators such as TRI. We're looking forward to further advancing ROS and Gazebo and to share those developments with the worldwide open source robotics community."

OSRF is an independent non-profit organization founded by members of the global robotics community to support the development, distribution, and adoption of open source software for use in robotics research and education. The group oversees the development of the Robot Operating System (ROS), a flexible framework for writing robot software, and Gazebo, a 3D multi-robot simulator.

As part of the two-year agreement, TRI will leverage the expertise of OSRC's engineering team, engaging them in a variety of initiatives. The deal also builds on Toyota's overall commitment to move past the confines of traditional corporate R&D.


About the Toyota Research Institute

Toyota Research Institute is a wholly owned subsidiary of Toyota Motor North America under the direction of Dr. Gill Pratt. The company, established in 2015, aims to strengthen Toyota's research structure and has four initial mandates: 1) enhance the safety of automobiles, 2) increase access to cars to those who otherwise cannot drive, 3) translate Toyota's expertise in creating products for outdoor mobility into products for indoor mobility, and 4) accelerate scientific discovery by applying techniques from artificial intelligence and machine learning. TRI plans to employ approximately 250 employees and is based in the United States, with offices in Stanford Research Park in Palo Alto, CA (TRI-PAL), in Kendall Square in Cambridge, Massachusetts (TRI-CAM), and in Ann Arbor, Michigan, near the University of Michigan campus (TRI-ANN). For more information about TRI, please visit www.tri.global.

Toyota (NYSE:TM), creator of the Prius hybrid and the Mirai fuel cell vehicle, is committed to building vehicles for the way people live through our Toyota, Lexus and Scion brands. Over the past 50 years, we've built more than 30 million cars and trucks in North America, where we operate 14 manufacturing plants (10 in the U.S.) and directly employ more than 44,000 people (more than 34,000 in the U.S.). Our 1,800 North American dealerships (1,500 in the U.S.) sold more than 2.8 million cars and trucks (nearly 2.5 million in the U.S.) in 2015―and about 80 percent of all Toyota vehicles sold over the past 20 years are still on the road today. 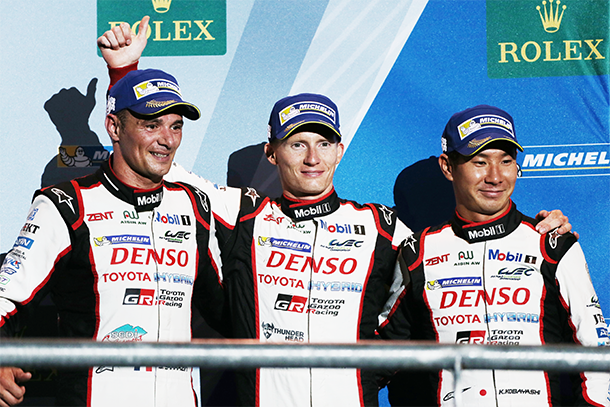